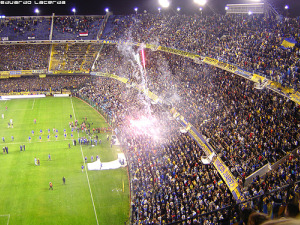 Even if you’re not a huge sports fan, attending a popular sporting event in a country you’re visiting can be a great way to get an inside peek at a culture. And in a city like Buenos Aires, there are few sporting events more popular than the soccer matches (or football matches, depending on where you’re coming from!) between the city’s big rival teams Boca Juniors and River Plate, called the “Superclasico.”

Getting tickets to see a Boca-River game can be challenging, but if you’re lucky enough to score tickets to La Bombonera (which is the affectionate nickname for the big stadium in the Boca neighborhood) then you’re in for a treat. If you’d like to find a cheap place to stay that’s close to the stadium, there are a few Buenos Aires hostels near La Bombonera – but it’s not like they’re right next door to the stadium, so while you won’t be far away on game day you also won’t be surrounded by crazy fans all day and night when you’re trying to relax afterward, either.

Below you’ll find a list of a few of the hostels near the Bombonera stadium in Buenos Aires, but if you decide to expand your search to include other cheap beds in the city, then this list of hostels in Buenos Aires is a great place to look.

Buenos Aires Hostels Near the Bombonera Stadium for the Superclasico

Some people will look at the word “hostal” and think it’s just “hostel” misspelled, but it’s not – it’s a slightly different kind of accommodation. Hostals like the Hostal de la Boca usually offer a few more services than a regular hostel but still for a really budget-friendly price. You can kind of think of them as somewhere between a hostel and a B&B.

Hostal de la Boca is a small spot that’s not far from La Bombonera in the Boca neighborhood of Buenos Aires, and it’s got a private patio/sun deck where guests can relax, a TV lounge with a DVD player for in-house movie nights, and a full guest kitchen so you can whip up some pre-game snacks if you want to. Internet access is available at the hostal.

The Boca neighborhood is an historic one in Buenos Aires, and Hostel One offers some proof of that. It’s built into a house from the early 1900s which was remodeled and turned into a hostel. It’s not far from the stadium, but it also has the benefit of being close to some of the attractions and parks in the Boca area, so it’s a good option for a hostel no matter what your plans are in Buenos Aires.

Hostel One’s interior is bright and sunny, and there are balconies all over the outside of the building that make for nice spots from which to watch life pass by on the streets below. The hostel’s common room is comfortable, and there’s high-speed internet and WiFi available in the lounge for free.

Assuming your visit to Buenos Aires will involve more than just a soccer match, you’ll probably want to look for a hostel that offers more than proximity to the stadium. With a hostel in the San Telmo neighborhood, like Sandanzas Cultural Hostel, you’ll get the best of both worlds – you’ll be in the heart of Buenos Aires and still not far from the Boca neighborhood and La Bombonera soccer stadium.

Sandanzas Cultural Hostel is small, with fewer than 30 beds total, but that allows them to provide guests with even more personal service. The largest rooms have six beds, and all of the rooms make use of shared bathrooms. Breakfast is included with the room, and the “cultural hostel” part of the name refers to the fact that the staff promotes the importance of cultural exchanges among its guests.

Another San Telmo hostel in Buenos Aires, Hostel Carlos Gardel, is still very close to the Boca neighborhood and the Bombonera soccer stadium to make it a good choice for your trip – especially if a Boca-River game is only one small aspect of your trip to B.A. Many of the city’s best-known sights are within walking distance of the hostel.

Hostel Carlos Gardel has both private and dorm-style rooms, a fully-equipped guest kitchen, and a BBQ area, and guests can enjoy free breakfast and free internet access. You can rent bikes right at the hostel if you’d like to take a spin around the city, and there’s an on-site bar and a place to exchange money.

The Hostel-Inn in Buenos Aires is a social spot in the San Telmo neighborhood next to the Boca neighborhood, and it occupies an historic building that was once a private home. There’s a private terrace where guests can relax, and although there are many places in the area where you can enjoy the city’s fabulous nightlife, this hostel also prides itself on having a bit of a party atmosphere.

Whether you’re a dancer or just a spectator, the San Telmo area where The Hostel-Inn Buenos Aires is located is the heart of the city’s tango tradition. In addition to the plethora of choices you’ll have for places to eat and drink, there is also a nice selection of tango clubs in the area as well. Breakfast is included at the hostel, and internet and WiFi are available.

This is another hostel in an historic building, this one dating from the late 1800s. Hostel Sol is a relatively small hostel covering two floors and offering a total of 24 rooms. The largest rooms have 8 beds, and there are also private rooms as well as loft apartments available.

Many of the rooms at Hostel Sol overlook a private internal patio area, which is ideal for chilling out and making new friends (or relaxing after an exciting soccer game). There are shared bathrooms on each floor of the hostel, and there’s a fully-equipped guest kitchen as well. Internet access and WiFi are both available at the hostel.