Hostels » Articles » Hostels in Dubrovnik Near the Beach

Hostels in Dubrovnik Near the Beach 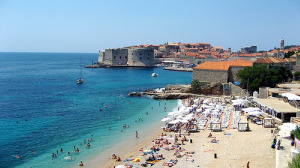 Croatia is no longer the undiscovered gem it once was, but traveling in this heavily coastal country remains cheaper than it is in many other European countries (especially if you’re looking for similar beach-oriented places) and it’s hard to beat for natural beauty. It’s not all about lying on the beach, either, as cities like Dubrovnik have lots of historic monuments to discover – in between times when you’re soaking up the sun, of course.

Visiting Dubrovnik is still pretty inexpensive as far as European travel goes, but that may not be true for much longer. As Croatia looks to join the European Union, such a move would automatically mean higher prices as the country switched to the euro. Until that time, the main thing budget travelers have to worry about is the increasing crowds filling up all the best hostels.

If you’re not into planning ahead and you’re a budget traveler, you have more options than just staying in one of the hostels in Dubrovnik. The city has lots of apartments or rooms to rent, and often all it takes is a stop at the tourist information office to get a lead on a couple worth checking out when you get into town. Usually, the TI will make the call for you to see if there’s room.

But during the high season especially, you may end up paying more than you’d like for a bed because things are full before you arrive. So to avoid having that problem, you might want to book a hostel bed in advance. Much of Dubrovnik is close to the sea, but here are some hostels which are just a short walk from the beach.

Dubrovnik Hostels Close to the Beach

The city of Dubrovnik is blessed with lots of coastline, owing in part to the small peninsula of land that juts out from the Old Town. There are hostels on that peninsula (one of which is on this list), and there are hostels in Old Town, but if you just can’t decide which way to go then why not go with the Youth Hostel Dubrovnik, which is somewhere in between?

The Youth Hostel Dubrovnik (an HI hostel) is located outside the Old Town, about a 10 minute walk away, but it’s even closer to the Adriatic Sea. There are 82 beds available, the largest dorm holding only 6 bunks, and all bathrooms are shared in the hallways. Guests can use the kitchenette and the comfy TV lounge. Linens are included with the price, but you’ll need to bring your own towels.

The Dubrovnik Backpackers Club not only has a lovely sea view from its position on the peninsula, it’s only 5-10 minutes walking distance from the beach itself. Not only that, it’s also only 5-10 minutes’ walk from a host of restaurants, shops, cafes, and bars. Old Town is a 10-minute bus ride away, and buses run frequently from the hostel so you’ll be able to get back and forth easily.

Those looking to stay right in Dubrovnik’s pedestrian-only Old Town may want to consider the Fresh* Sheets Hostel, which calls itself the only hostel in the Old Town. It was opened in 2008 and renovated in 2009, and is only a few minutes’ walk from a “secret swimming hole” that’s great for swimming and sunbathing.

All the rooms at Fresh* Sheets have en-suite bathrooms, and guests at the hostel get free breakfast, free internet access, and free WiFi. There are nightly drink specials at the on-site bar, regular movie nights in the TV lounge, and a fully equipped guest kitchen. The dorms are small, with only four beds per room.

If you’re looking for a balance between easy access to the beach, proximity to the historic Old Town, and a bit of peace and quiet away from tourist crowds, then take a look at Guesthouse Peter. It’s only two minutes from the entrance to Old Town, so close enough to get there quickly but far enough away to be a bit quieter, and it’s also close to the lovely sea. They’ve also been in business for 25 years, so they know what they’re doing.

The downside to Guesthouse Peter is that it’s small – it’s a guest house, with individual rooms to rent instead of a good-sized hostel where you book the bed, not the room. So if this place appeals to you you’ll want to book it sooner rather than later. Note that not all the bedrooms have private bathrooms, so if you’d like to cut costs you can book a room with a shared bath.

The Hostel Marker is part hostel and part apartment rental (it’s also called “Apartments Lovrijenac”), so it’s likely to suit several different types of travelers and travel budgets. The rooms they rent are spread out into three different buildings, but they’re all in the historic Old Town and all very close to the sea.