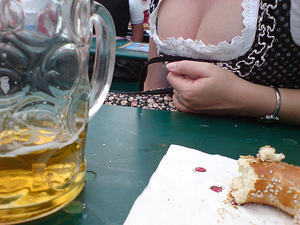 If the first thing that comes to mind when you think of Munich isn’t the annual beer-drenched party that is Oktoberfest, then you probably don’t have much use for this list of Munich hostels near Oktoberfest. To be fair, they’re all great hostels which are worth looking into for a visit to the Bavarian capital, but some of them are strategically located so as to be super-convenient for one thing only – Oktoberfest revellers stumbling home in a drunken stupor.

Keep in mind that Oktoberfest hostels fill up well in advance of the annual festival, so if you’re planning to attend the upcoming event and you haven’t booked your hostel room yet you might want to consider doing so immediately. Latecomers will have to book at places that are much further away from the festival grounds than these hostels, if they can find any hostels in Munich with vacancies at all. You really don’t want to be one of the people who has to hop on a train to your hostel in the next town over after a night of draining beer steins.

>> And for visits to Munich when it’s not Oktoberfest (or just to get away from the craziness), there are many more hostels in Munich you can choose from.

When it comes to proximity to the Oktoberfest festival grounds, you can’t do much better than the Easy Palace Hostel. It’s a five-minute walk away from the Theresienwiesen in a building that used to be a luxury hotel. There are still private rooms available, but also lots of dorms – so you can choose the privacy level and budget that fits your style.

Should you not get enough to drink at Oktoberfest, the Easy Palace Hostel has its own on-site bar where they offer free Bavarian beer tastings to guests. Hostel guests also get discounts at area restaurants. Breakfast is available at the hostel (if you can wake up before 10am) for a fee.

The highly-rated Meininger Hostel is located right next to one side of the central train station in Munich, and it’s still only about a 10-minute walk from the Oktoberfest grounds – so you not only get a hostel that’s well-placed for Oktoberfest partying, you get one that’s close to public transit for getting around the rest of the city. If, that is, you have any energy left over to see the rest of the city.

Meininger Hostel is one of Munich’s most popular hostels, so it has a habit of filling up even when it’s not during Oktoberfest. In other words, if this is your hostel of choice then you’ll want to make your reservations as soon as humanly possible, regardless of the time of year. Meininger has an on-site bar and offers free WiFi access. Breakfast is available for a fee.

There are a couple A&O Hostels in Munich, but this is the one that’s in a better location if you’re partying at Oktoberfest. It’s about a 2-minute walk from the city’s central train station (Hauptbanhnhof), and 10-15 minutes from the Oktoberfest grounds (assuming you’re not stumbling around and getting lost). The neighborhood around the hostel is full of restaurants and pubs as well.

A&O City Hostel offers a free breakfast buffet, which is a nice perk, and guests also get free towels and linens. WiFi & internet access are both available, each for a fee.

There are YMCA locations all over the world, and that includes Munich. And lucky for you budget travelers, the YMCA in Munich is close to Oktoberfest. This hostel also happens to be close to the central train station, so you’ll be able to access public transportation easily as well.

At the CVJM/YMCA in Munich there’s no curfew or lockout period, but keep in mind that this isn’t exactly a party hostel – so if you’re headed to Oktoberfest for a little fun but aren’t planning to get completely wasted and spend the night curled around the toilet, this might be a good hostel option for you. They offer free breakfast and internet access to guests.

The Euro Youth Hotel & Hostel is a favorite with backpackers and has been for years – it regularly appears in budget travel guidebooks, so don’t be surprised if this one fills up faster than others. It’s a few steps from the front door of the central train station in Munich, and it’s still only a 10-ish minute walk from Oktoberfest.

Guests at the Euro Youth Hostel & Hotel enjoy free WiFi throughout the hostel, free linens, and can join the hostel’s free walking tour of the city as well. There’s an on-site bar (y’know, in case you don’t get enough at Oktoberfest) and there’s a cheap all-you-can-eat breakfast available every morning for a fee.

Another hostel that’s a few steps from the central train station’s front door is the highly-rated Wombats City Hostel in Munich. It’s another hostel that routinely gets its name into backpacker guidebooks and therefore is routinely booked solid. Staying here means you’re close to public transport, about five minutes’ walk from the old town, and 10-15 minutes’ walk from Oktoberfest.

One of the things that the folks at Wombats City Hostel are most proud of is their repeated “Cleanest Hostel in the World” awards given by hostel reviewers. There’s an on-site bar, and breakfast is offered for a fee. WiFi is free in the lobby.

photo at top by farbfilm