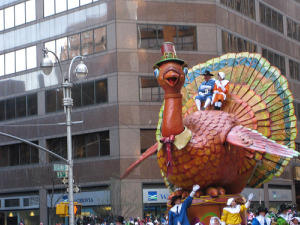 Watching the Macy’s Thanksgiving Day Parade work its way through New York City has been a part of many Thanksgiving traditions for decades – but if you’re going to be in Manhattan over the Thanksgiving holiday, then you really don’t want to be watching the parade on TV. This is a chance to watch an iconic American image stroll past right before your eyes – and if you’re not from the U.S. and you don’t celebrate Thanksgiving, that matters not at all. After all, who doesn’t love a parade?

Visitors to New York during the Thanksgiving weekend may be faced with traffic jams, higher prices, and cold weather, but at least two of those things are regularly found in New York year-round. But if you’re planning to check out the Macy’s Thanksgiving Day Parade during your trip, then you might want to think about staying somewhere close to the parade route so you don’t have to fight through much of the traffic (car or people traffic) to stake out a spot.

Be aware that for the 2009 version of the parade, there’s been a change to the route. The parade will no longer snake down Broadway from Columbus Circle – for 2009, they’re making the route a little longer by forcing it to go at right angles instead of taking that diagonal “shortcut.” The 2009 parade route goes from Columbus Circle along Central Park South, turns right on 7th Avenue, left on 42nd Street, right on 6th Avenue, and finally right again on 34th Street. You’ll find a map of the 2009 route here, and more information about the parade on the official website.

So, back to your lodging. The following New York hostels are close to the 2009 parade route, so you won’t have far to go from your bed to the parade (or back again when it’s all over), and you’ll save money by staying in these places instead of a hotel. Keep in mind the prices may be higher over the holiday weekend than on other November weekends, and the best places will book sooner than others – so make your reservations as soon as you know where you want to stay.

The West Side YMCA is one of the closest hostels to the parade’s starting point (at 77th Street & Central Park West, near the Museum of Natural History), so if you want to see the parade before all the marcher’s legs get tired this might be a good spot to stay in. Additionally, this location is great for visiting several of NYC’s landmarks, too.

Guests at the West Side YMCA can choose from single or double rooms, both of which have single-sex shared bathrooms available in each hallway. There’s a TV and A/C in each room, and of course the Y’s fitness equipment for your use. There’s free WiFi in the lobby.

Another option in the early stages of the parade is the Columbus Circle Hostel, which is a block or so away from the circle. Watching the parade from around Columbus Circle will give you your only opportunity with the new 2009 parade route to see the marchers going in something other than a straight line or a right angle, so this is the only test of how they’ll negotiate curves.

Columbus Circle Hostel was only opened in April 2009, so it’s new to the NYC hostel scene. There are 96 beds, a guest kitchen, and internet & WiFi access available. There’s also a comby lounge with a big-screen TV, and the location makes it a good base from which to explore many New York attractions (not just the parade).

As the parade passes right through the Times Square area, any hostel that’s on or near Times Square is another good choice location-wise, especially because it means you’re on or near one of New York’s major landmarks long after the parade’s gone. The Jazz on Times Square Hostel, as part of the popular Jazz Hostels chain, is one of the better options in that neighborhood.

Guests at Jazz on Times Square Hostel get free linens, towels, WiFi, and breakfast (lots of nice free perks that aren’t always available in hostels), although the internet kiosks will cost money if you don’t have your own laptop. There’s a guest kitchen and a big game room for hanging out, as well as a backyard patio area which is good if the weather’s nice.

Another great Times Square hostel choice is the 311 Times Square Hostel, which not only has a great Times Square location (good for parade-watching, good year-round) but also consistently gets good reviews as one of New York’s top hostels. Based on the reviews alone, this is one that may fill up fast.

If you’d rather be at or near the end of the parade route, either so you can see what an exhausted marcher looks like or to do some shopping at Macy’s when the parade’s done (the parade ends near the department store), then a hostel near Penn Station is a good option – and the Chelsea Spot is a good hostel in that area. Aside from being near the end of the parade route, this hostel is also within walking distance of the Empire State Building & Madison Square Garden.

Guests at the Chelsea Spot get WiFi and internet access, use of a fully equipped guest kitchen, a comfy lounge with a big HD LCD TV, and all the rooms have A/C. The rooms and bathrooms are, even the hostel management admits, quite small – but between the lounge, kitchen, and backyard common areas and the fact that the city of New York is just outside the front door, you shouldn’t do much more in your room than sleep anyway.